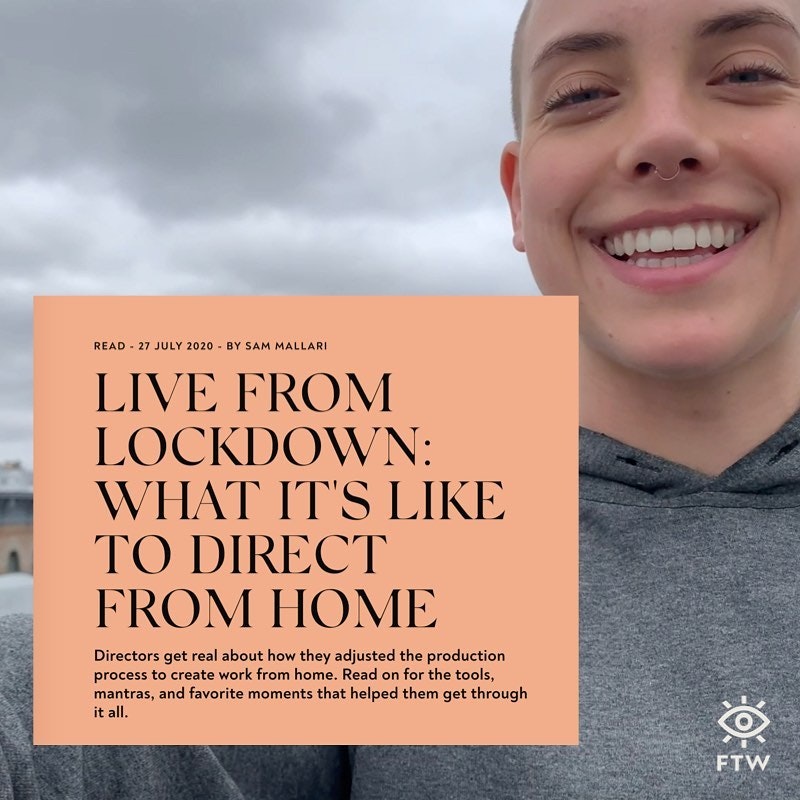 Free The Work sat with eight wonderful directors who broke down their remote directing experiences and encapsulated their highs and lows during the process. Read Adi Halfin's interview alongside other director's here, or read it all below.

You'd be very hard-pressed to find anyone who'd say working during the pandemic is cake, let alone directing a whole shoot from lockdown. But living through such troubled times raises the question: What can artists give back to the world when the world feels like it's in shambles? When a project presents itself during a pandemic, how can a director adjust and adapt in order to continue doing what they love?

How did this project come to be?
Adi Halfin: It was very unconventional. Around February, I was in touch with Asaf Avidan about directing another music video for his upcoming album. Once we realized the video was not going to happen, Asaf wanted to release a different song with a video that would be dancers filming themselves at home. He’s in Italy which is one of the countries that got hit really hard by COVID. So he just wanted to make a feel-good video to show a beautiful kind of connection, even in the middle of a pandemic.

All the footage was shot remotely, which sounds especially challenging for a dance video. Were dancers in charge of choreographing their own segments? What notes did you give as a director that helped the dancers mesh together in the final video?
Bobbi Jene Smith and Or Schraiber cast these phenomenal dancers who are improv geniuses. I love improvised dance, since you get to see the interpretation of the song each one gives with their body. But it’s a very unusual experience receiving footage without being on set. You don’t know what to expect. I would see certain angles that had potential but were unused, or the tone of the movement wasn’t exactly right. Luckily reshoots were easy, since it was all filmed with their phones at home, and I guess no one had anything better to do that day…so I gave notes and received the footage pretty fast. Some dancers actually had proper cameras and we were concerned about if the different camera qualities would “stick together” in the final edit. But I think the unifying emotions between the dancers helped weave the clips together. I am normally very specific on the aesthetics of my films and this was a good exercise in letting go and just create something that makes people happy and brings them together.

How long did the process take?
It was the shortest process of directing I ever experienced. It was definitely no longer than two weeks, but it might have been even less. We actually didn’t have a crew, since the dancers were filming themselves, so our “crew” were the dancers and their partners who were filming them. Bobbi Jene Smith and Or Schraiber did the casting and I was both director and editor. I was pulling all-nighters since I have an eight -month-old baby, so I have no choice but to work when she’s sleeping.

Did you have any favorite “on set” moments?
My favorite moment was when I showed my partner the first cut. She’s a DOP and my biggest critic. For the first time ever, she said, “It’s really good,” after watching a first cut. I was really surprised. First cuts are never good, and I was shocked to get such a reaction from her. And now that the video is released, the true celebration is seeing people’s messages to me, telling me that this video cheered them up or made them dance during such a tough period.